As I mentioned a few weeks back, late June 1 my car was struck from behind by another driver, totaling my car and injuring me in the calf muscle of one leg. It could have been much worse, but I was in a fair amount of pain for a few weeks and I’m still not totally recovered, but I’m definitely feeling better, which is why I’ve finally resumed blogging. For anyone interested, below are a couple of photos of my car taken at the junkyard where it was towed. 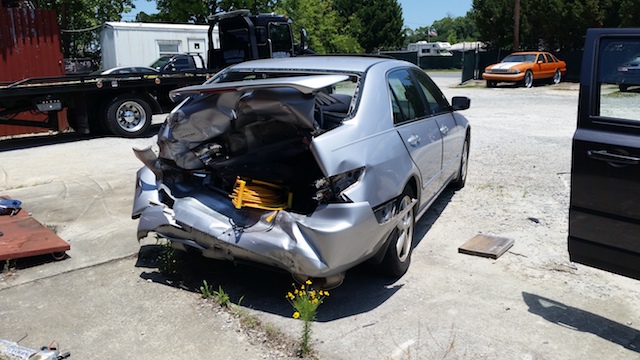 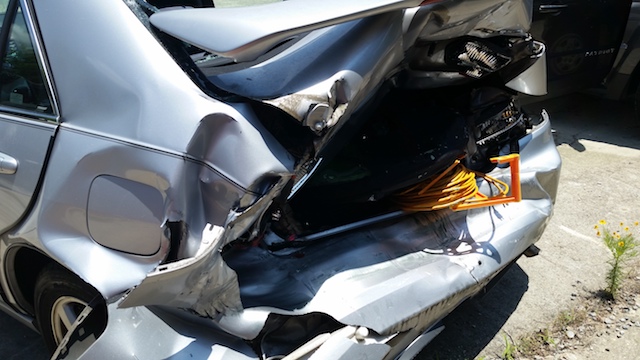 A couple of notes on car buying: I tried buying a car from a new car dealer but was so disgusted by the blatant (and ineptly obvious) lying* from the sales manager that I simply got up and walked out. I ended up buying a late-model, low-mileage used vehicle from CarMax. I’m sure they have their failings, but they sold me a car that proved to be better (and even slightly cheaper) than advertised on their website.

* To be specific, the new car dealer tried to claim that the price advertised on the website for that particular car — identified by VIN — included special discounts I didn’t qualify for and did not include dealer-installed options. Both claims were unambiguously false, and in fact the sales manager went so far as to tell me that the first claim was a lie, which he said other dealerships told while they were too honest to stoop to, unaware that the salesman had just told me that very lie five minutes before. To defend the second lie they pointed to a disclaimer elsewhere on their website saying that pricing on the manufacturer’s website did include dealer-installed options — presumably true, but obviously irrelevant.