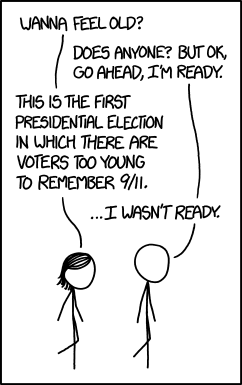 In more or less the same vein, consider this:

Below courtesy of YouTube are the first two episodes of the Buck Rogers Saturday matinee serial starring Bust Crabbe, which premiered in 1939, the same year as The Wizard of Oz and Gone with the Wind. Star Wars came out 38 years later, in 1977.

But from 1977 to now was 39 years. So the original Star Wars was closer in time to that Buck Rogers serial than to today. If you’re old enough to remember when Star Wars was released, you’re old, or at least bearing down on that status.

Incidentally, 40 years after the Buck Rogers serial there was a Buck Rogers television series starring Gil Gerard. In one episode Buck has the following two brief but amusing radio exchanges with a fellow space pilot played by Buster Crabbe (as “Brigadier Gordon,” an obvious reference to Flash Gordon, another popular space adventurer from the comics portrayed by Crabbe in serials earlier in the 1930s).