A little over two years ago I posted something (link) about research showing that white American women without a high school diploma were experiencing falling life expectancy, though comparable members of other races were not. Note that this should not be misinterpreted to mean that lack of education directly leads to health problems. The mortality increase might result from whatever life circumstances caused someone to drop out of high school, or from low income in adulthood, or from both, or from other factors that happen to be correlated. The mystery is why these same factors would specifically affect white women, leaving them with an even lower life expectancy than black women with similar levels of education.

More recent research has amplified on this, most notably a paper by Anne Case and Angus Deaton of Princeton University entitled “Rising morbidity and mortality in midlife among white
non-Hispanic Americans in the 21st century” forthcoming in Proceedings of the National Academy of Sciences (link). Quoting from the abstract:

This paper documents a marked increase in the all-cause mortality of middle-aged white non-Hispanic men and women in the United States between 1999 and 2013. This change reversed decades of progress in mortality and was unique to the United States; no other rich country saw a similar turnaround. The midlife mortality reversal was confined to white non-Hispanics; black non-Hispanics and Hispanics at midlife, and those aged 65 and above in every racial and ethnic group, continued to see mortality rates fall. This increase for whites was largely accounted for by increasing death rates from drug and alcohol poisonings, suicide, and chronic liver diseases and cirrhosis. Although all education groups saw increases in mortality from suicide and poisonings, and an overall increase in external cause mortality, those with less
education saw the most marked increases.

Case and Deaton’s methodology has been criticized for failing to take into account variation in the size of age cohorts over time, but even after adjusting for that, the basic results hold true: Middle-aged white Americans, and in particular middle-aged American women (considered as a whole, not just those without high school diplomas) are dying at a rising rate. And a major reason for this, it appears, is a rise in self-damaging behavior such as smoking, drinking, and drug abuse. Meanwhile members of other ethnic groups don’t exhibit the same rise in mortality and morbidity (i.e., sickness rates). Here are charts I swiped from the Talking Points Memo website (link below): 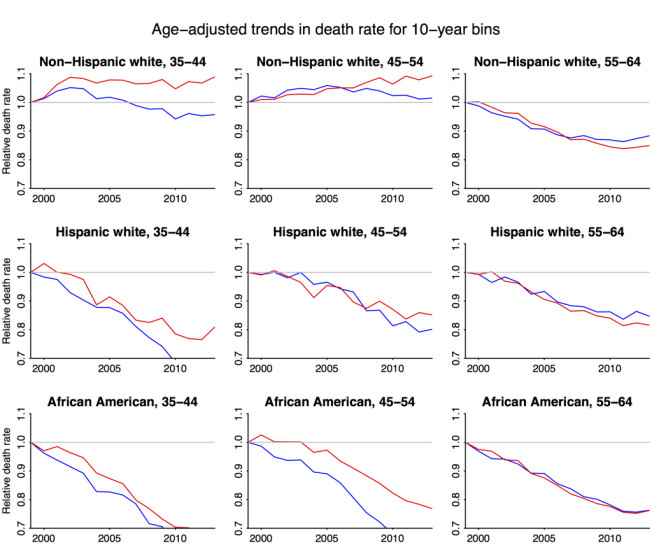 The blue lines are for men, the red ones for women. The vertical axis shows the death rate relative to 1999 for the indicated group. That is, the lines show whether things are getting better (a falling line) or worse (a rising one) for the group in question.

(Note that this means that it the charts say nothing about the absolute rate of mortality for a given group, only for the change over time for that specific group. Also, individuals who were in the 45-55 group in 2000 weren’t in that same age cohort ten years later unless they’ve figured out a trick I wish they’d share with me.)

Incidentally, a more detailed examination of the data by geographic region shows that the rise in mortality and morbidity for middle-aged whites appears to be worst in the South and least in the Northeast, whatever that might imply about the causes.

For more discussion of this see these blog posts from December 1 and December 2 by Josh Marshall at Talking Points Memo.

Kevin Drum wrote a response to Marshall (link) saying in essence that while the negative consequences are most obvious among middle-aged whites, they affect other age groups as well.

Finally, it may be worth stating for the record that this research doesn’t mean that we white people are now suddenly disadvantaged. For the most part it still pays to be a white guy in the U.S.