The U.S. dollar is “fiat money,” meaning money that’s just declared into existence, in the dollar’s case by the U.S. Federal Reserve. (“Fiat” is Latin for “let there be” or “let there be made” or “let there be done” as in the biblical “Fiat lux” — “Let there be light.”) It has value only because people think it has value and are willing to exchange things for it. The Treasury will no longer give you a fixed amount of gold or silver in exchange for paper currency as it used to promise to do. In fact, the vast majority of money today exists in the form of accounting entries, mainly in electronic files, not paper money, and often not even printed out on paper documents except in occasional statements.

The idea of fiat money bothers some people, who call for a return to the gold standard, contending it would stabilize the number of dollars in circulation and hence their value. Except it wouldn’t, as this graph makes obvious: 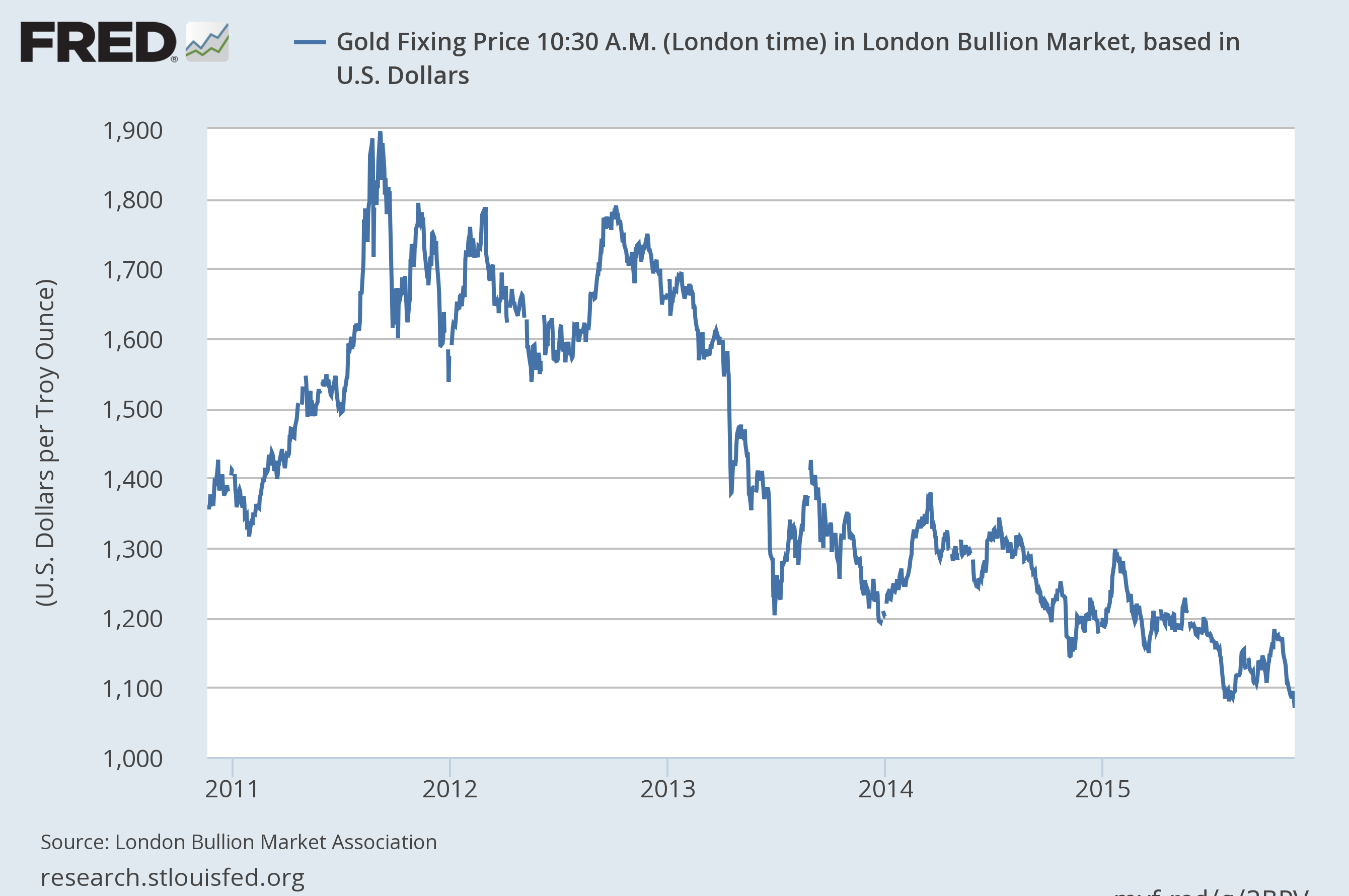 This is the free-market price of gold in dollars per troy ounce from the start of 2011 through the present. To be fair I should point out that the vertical axis doesn’t start at zero, which exaggerates the apparent volatility. But the free-market value of gold is still plenty dang volatile, losing almost half its effective purchasing power between its peak in the latter part of 2011 and today. So much for the notion that gold has a stable inherent worth. Fiat dollars are in practice far more stable than gold. It would take nearly twice as much gold to buy a car or a case of soda as it did four years ago, but the price in dollars has changed only slightly.

I’ve heard people respond to this by pointing out that the price of gold was much more stable when the gold standard was still in use. But that doesn’t show a stable inherent value of gold any more than the fixed price of a metric ton of concrete, as decreed by a Soviet bureaucrat in the Communist era, proved that concrete has stable inherent value. A return to the gold standard wouldn’t stabilize the value of a dollar; the dollar would end up stabilizing the price of gold.

Moreover, a growing economy needs a money supply that grows along with it, and the growth in the gold supply is constrained by how fast it can be mined. (You may recall that in his Autobiography, Benjamin Franklin mentions an economic crisis brought on by a money shortage and the use of paper currency to relieve it.) In fact, an economy would likely collapse into deflation if the money in circulation (in whatever form) didn’t grow faster than the supposed underlying reserve of gold and silver. Fortunately the existence of banking effectively expands the money supply by lending money that ends up being deposited into the same or another bank, becoming available to be re-lent and re-deposited. Even when a gold standard is theoretically in place, as long as there is banking, relatively little money in circulation is in the form of paper or coins. Even so, when paper currency is backed by gold or silver, the treasury’s relatively fixed stock of gold or silver can interfere with a central bank’s efforts to set monetary policy, and we know from hard experience that such constraints create more problems than they solve. That’s why all major economies have abandoned the gold standard. (All minor ones too, probably, though I haven’t checked exhaustively.)

It’s true, of course, that an irresponsible government can go wild generating huge quantities of fiat money and provoking hyperinflation, as in Weimar Germany in the early 1920s and in Zimbabwe more recently. But in practice this is rare, because hyperinflation is devastating to the wealthy, and wealthy people, as you may have heard, tend to have some influence.

All this is common knowledge in public policy circles, so it’s a little disturbing that during a recent Republican presidential candidates’ debate, Texas Senator Ted Cruz called for a return to the gold standard and none of the other candidates pointed out why this is a bad idea. Fortunately others did later, including moderate conservative writer Megan McArdle (see also this earlier piece from her), Jeff Spros, Matt O’Brien, and others.

[Updated 2015 November 30, December 1 and 19, and 2017 April 25 in my usual optimistic effort to make some clumsy wording less opaque, and 2016 February 25 to mention the possibility and rarity of hyperinflation.]