This chart, from Scott Barber at Reuter’s, compares economic performance for the United States, the United Kingdom, and the Eurozone (the 17 countries that have adopted the euro as their currency): 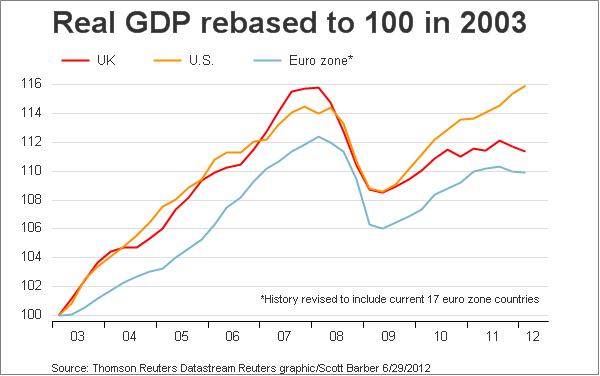 Change in inflation-adjusted GDP from 2003 to early-2012 for US, UK, and the Eurozone

The vertical axis shows real (meaning inflation-adjusted) gross domestic product relative to the level at the start of 2003. All of the economies experienced a downturn in 2008 and began recovering in 2009, but the U.S. recovery has been substantially stronger, especially in comparison with the U.K., which has fallen back into recession. Despite this, many U.S. conservatives advocate adopting policies more like those of Britain.